When I write a post about Avery, I honestly don’t know where to start.  Every day there is something new he does that makes me surprised, smile, or laugh! He will count, or ramble off a paragraph of sentences that actually make sense, or he will squeal with delight with something as simple as throwing the dogs toy.  He does the funniest things too.. he never forgets anything, and when he’s doing something odd and you put two and two together, you realize what he’s doing and he’s so smart! 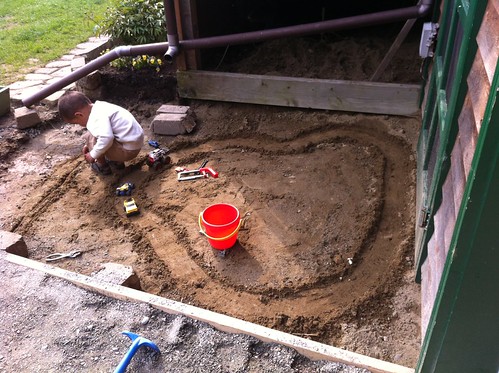 So, what’s to report of Mister Avery?  Well, he’s 2-3/4 years old.  He weighs in at 30lbs on the dot.  He’s just over 3 feet tall (I’m holding off on measuring his height on his giant ruler chart until his birthday, so it’s a yearly thing).  He wears size 3T clothes and size 8 shoes.  He’s still in diapers, but in three months and he’ll be turning THREE – That means we have potty training coming up and preschool starts in September, (as long as potty training is a success).

Avery’s been doing great at school.  He does projects at school and loves to tell me about them and show them off.  He recently made a paper plate pig, a policeman badge and he is always picking out rocks at the playground and asking to bring them home.  When I pick him up from school, he’s always outside playing in the playground (unless it’s pouring) and he runs up to the fence yelling ‘Mommy, Mommy!’  When I get out he asks, ‘You have Fraisier? You have Mimi?’ because sometimes I bring a dog or one of my parents with me to pick him up.  The kids at the school love seeing the dogs.

Joey meets us every afternoon to pick Avery up, because he works next door.  Avery is always looking for him and his teachers say that Avery talks about Joey all the time.  That and camping – you know, that one night we slept in the camper, he KEEPS talking about it, telling them he’s going camping every weekend.  Too cute.

Avery’s been an eating and sleeping champ as of late.  He eats well at school, sits with us thru a whole dinner (but prefers to eat outside at the picnic table). He still completely avoids veggies but loves his dairy, fruits, and meats. His favorite snacks are gummies, craisins, clementines (but HE has to peel it), and pistachios.  His new favorite foods that he just recently tried are peanut butter – he likes to dip his animal crackers in it, and ice cream!  Avery has never been interested in ice cream, but recently we went to the Vermont Dairy Festival and he had a creemee and loved it!  Now it’s a nightly thing after dinner. 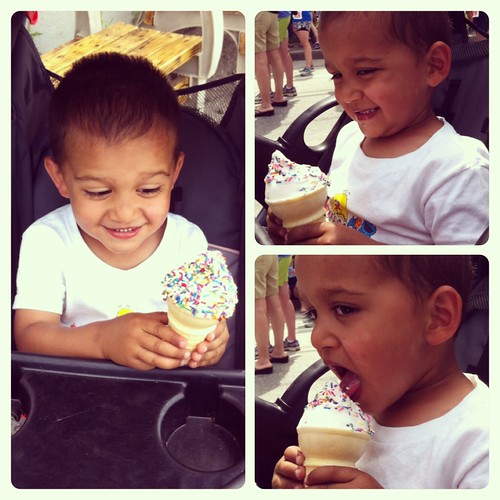 Avery’s typical schedule goes a little something like this…

6am wakes up for the day, clutching his blanket and stumping to the living room.  He plops onto the couch and asks to ‘Pick a Cereal’… he likes to see his choices between fruit loops, cheerios, and whatever else we have on hand.  He then sips on some milk and eats dry cereal with his hands until he asks for sausage.  Then he gets a cute plate of sausage, craisins and cheese, all the while watching Chuggington or Thomas the Train. 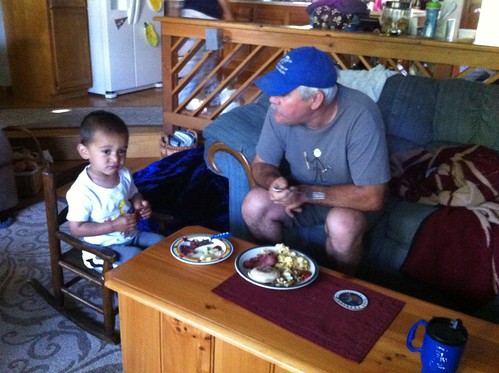 645am Avery is done breakfast, dressed and ready for school.  He gives Mimi 2 kisses and out the door we go, usually stopping to pick up some special car or rock that he insists to bring to school with him.

7am I drive Avery to school and we chat about cars, birds, and school buses.  At drop off, Avery runs inside but hunkers in his cubby as I get his stuff situated.  He is very shy in the mornings and the teacher usually has to pry him off me because he doesn’t want me to go, but they are very good at distracting him and I wave out the window as I leave.

4pm I pick Avery up from school.

415pm We are back home and don’t step a foot inside.  Avery plays in his sandbox, or with the gardening hose, we take a bike ride, or go swimming in the kiddie pool. 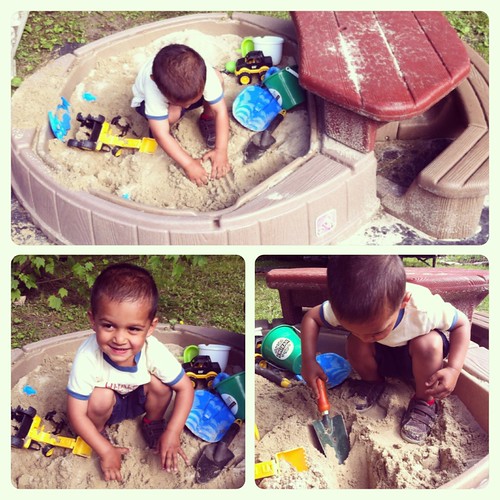 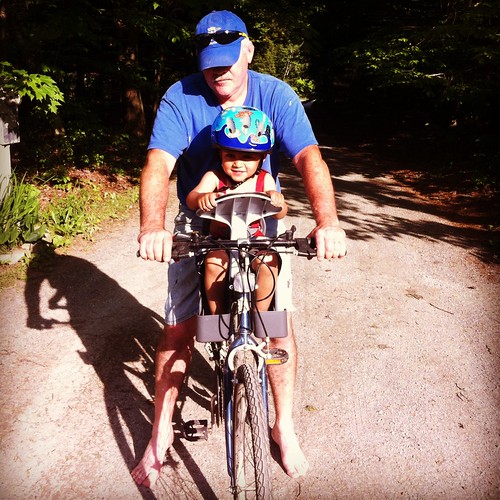 6pm We eat dinner outside on the new deck Avery helped Grampy build. 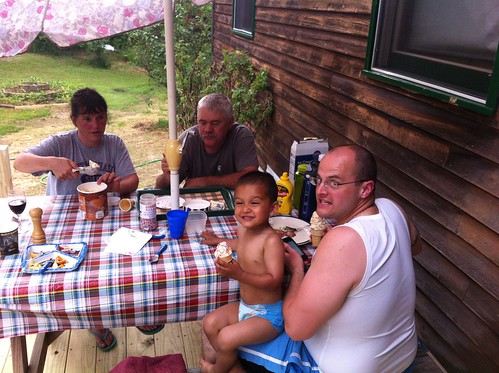 After, we play some more… last night Avery helped Grampy paint a project, or take the dogs for a walk. 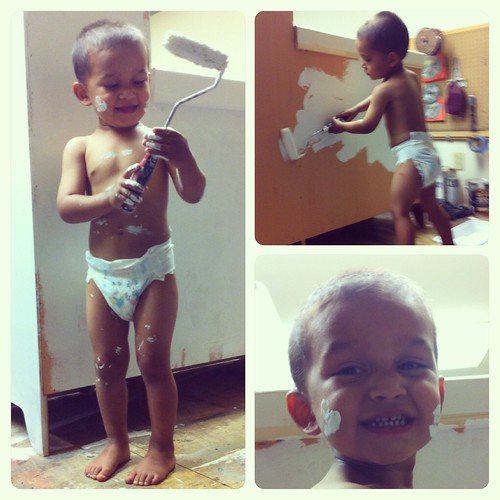 7pm Shower time.  Yep, baths are no more.  Avery loves water and after a few tries (that he requested) he has now been showering every night, instead of taking a bath.  Such a big boy! 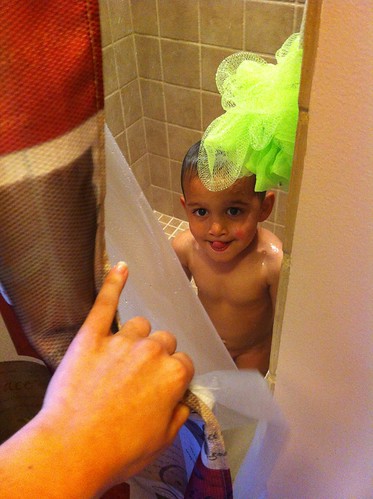 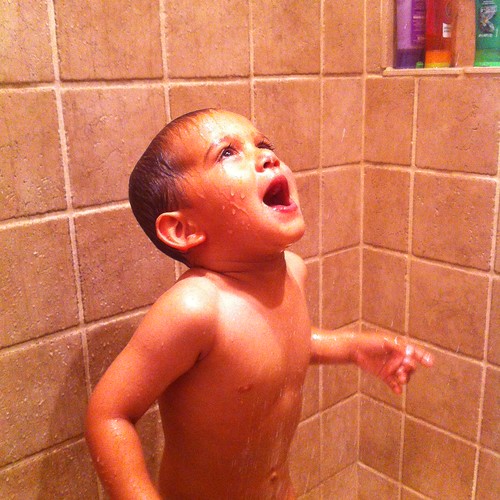 720pm Popcorn and a movie with Grampy to settle down for the night.  Avery prefers the ‘Elephant movie’, ‘Cars’ or ‘Toy Story.’  Oh and my mom took out our old school popcorn maker, so we make healthy popcorn and Avery sees where popcorn comes from!

745pm Avery picks out books (2-3) for bed.  We read them together.  Some books he can ‘read’ himself.  Since we’ve read them so many times, he knows what each page says without actually reading it.. it’s too cute.  His favorite books lately are a Cars book with Mater, the Tickle Book, and Please Baby Please.

8pm Time for bed.  I sit with Avery for a few minutes, then leave and go back and check on him until he falls asleep.  He’s gotten much better about falling asleep lately without getting back up.  He’s usually fast asleep by 830 and rarely wakes up in the middle of the night.

Our weekdays are typically the same unless we have a play date with Owen and Hannah. On Wednesdays we go to a big playground for an hour and then to visit my grandparents.  Avery had so much fun last week chasing around another little girl.  It’s so cute to see him interact and actually play with other kids. 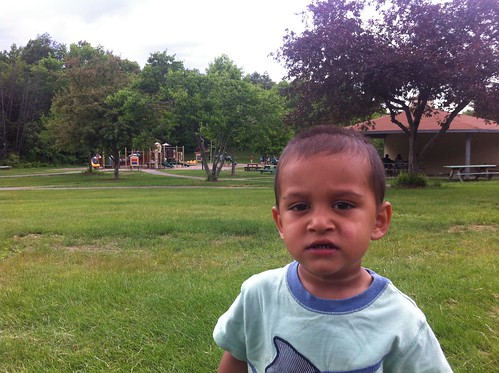 Avery loves the toys grandma has, and we go on walks together. 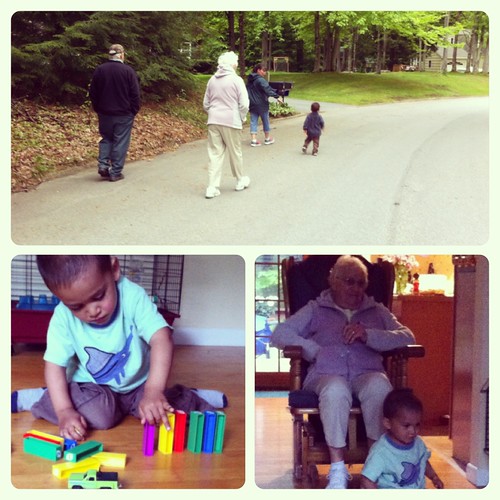 At last week’s visit, grandma had a new dog, Gracie.  Avery and Gracie followed each other around the yard – too cute! 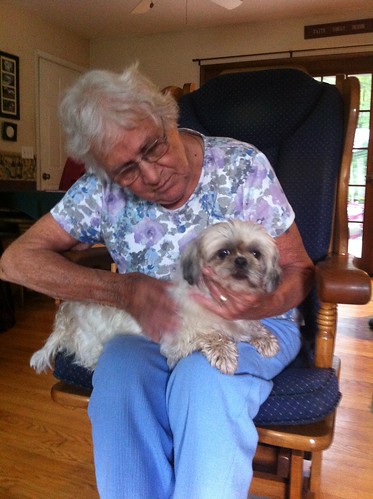 On weekends we play around the house, go to birthday or graduation parties, play dates or festivals… anything fun going on!  Last Saturday we had a play date with Quinn and his big sister.  They have baby chickens and played in the chicken coop their parents were building. 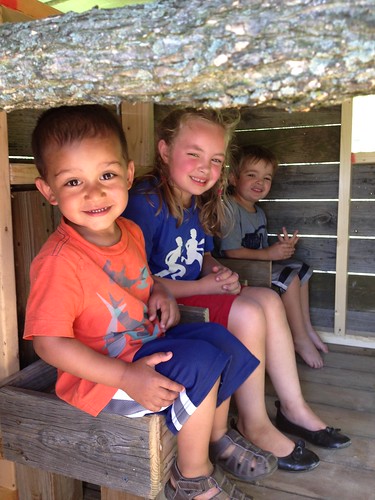 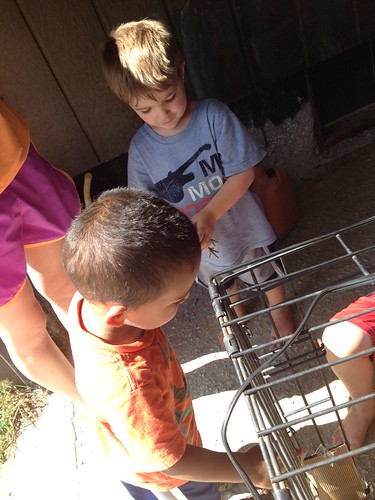 Avery helped Grampy build a deck in his new shirt sent from his Aunti Shalini… it came all the way from Brazil! 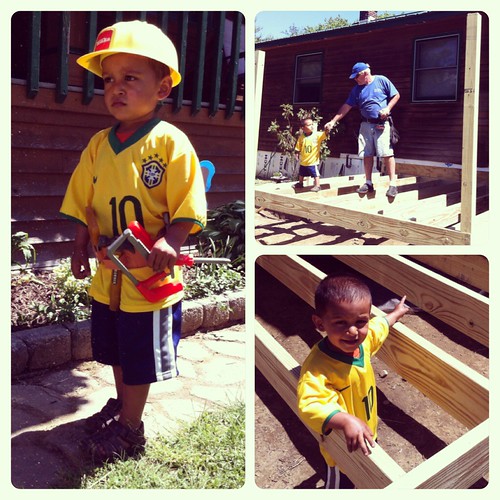 On Sunday, Joey ran the 10K Milk Run and we went to cheer him on and enjoy the festivities… and food! 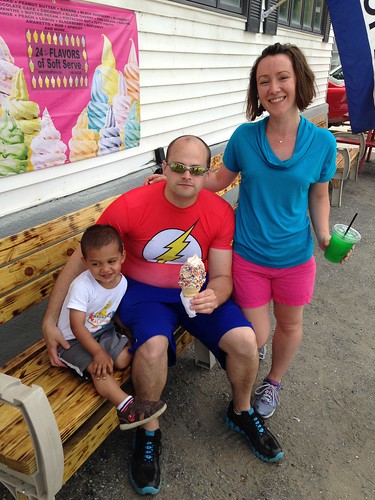 Avery’s speech has been amazing lately.  His teacher calls him her ‘parrot’ because he repeats everything she says, and I believe it.  He speaks in full and multiple sentences and and if has trouble remembering a word, he does this adorable studder… he says ‘Mimi go to… to… to… to.. grocery store’  He repeats a word a few times until he gets the word he’s missing… too cute.

As wonderful as all this sounds, we still do have our moments… Avery is two after all.  He is usually a good listener, but when he isn’t he does throw tantrums, screams, and doesn’t listen.  I count to three, give him options, ask him to use his words to talk to me (instead of screaming really loud), and if it comes to it, Avery gets a time out.  He only has one every week or so, but they are times like he steps on the dogs tail on purpose, laughs, and does it again after being asked not to.  Overall, he is a very good listener, polite, and shares with others.  It actually surprises me at how well he behaves most of the time… because we have way fewer meltdowns than in the past… he’s such a trooper when we have outings and he’s loving life up here in VT.  Avery can play in the dirt with cars or a water bottle squirting ants for hours and be completely happy. 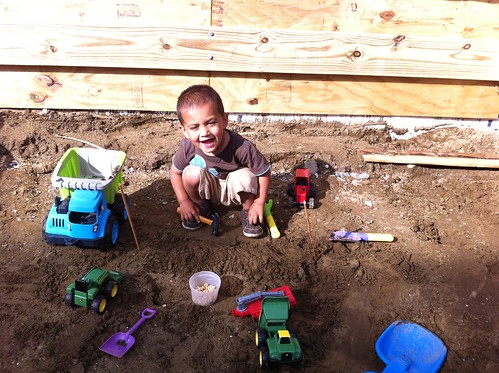