Well, it’s official… 5 months after we bought our house, I am finally sharing the first remodel- Avery’s Bedroom!  Avery’s room is painted, pictures are hung, and every lego and hot wheels is stashed away in a bucket or bin.  Here’s a timeline of how it all went down… 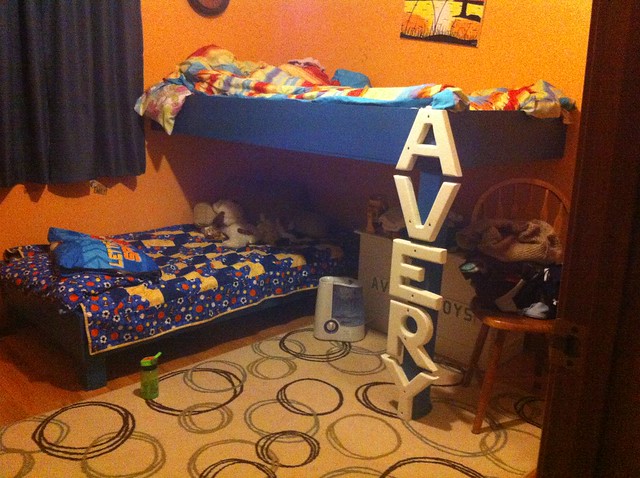 Grampy made us a snazy bunk bed (I designed it, he built it!), so we could share a room while we stayed with them and saved up to buy the house.  Avery could re-use the bed in the new house and have room for friends to sleep over when he gets older. 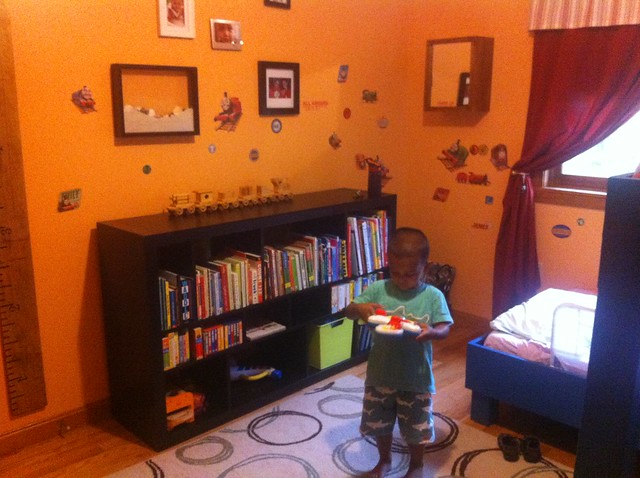 We made it home for the 18 months we stayed with Mimi and Grampy – using wall stickers and hanging pictures and artwork over Aunt Sarah’s orange walls (It was her room before we moved in). 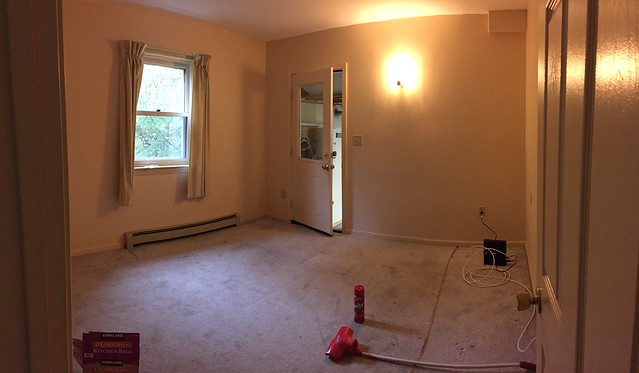 We chose this room in the new house for Avery’s room.  It was one of two rooms on the main floor of the house, with the other bedroom next door and bathroom off the same hall.  Our house is BIG!  So, we decided to live mostly on the main level and expand to the rest of the house eventually.  This means less to furnish, remodel, heat, and CLEAN! (We have FOUR bathrooms… less to clean was essential!) So, Avery’s room was Uncle John’s Office/Entry Mud Room.  There was a door from this room into the garage.  Our first order of business was to close it up. (the garage can be accessed thru the basement, upstairs, back, and front doors, so we didn’t really NEED it) 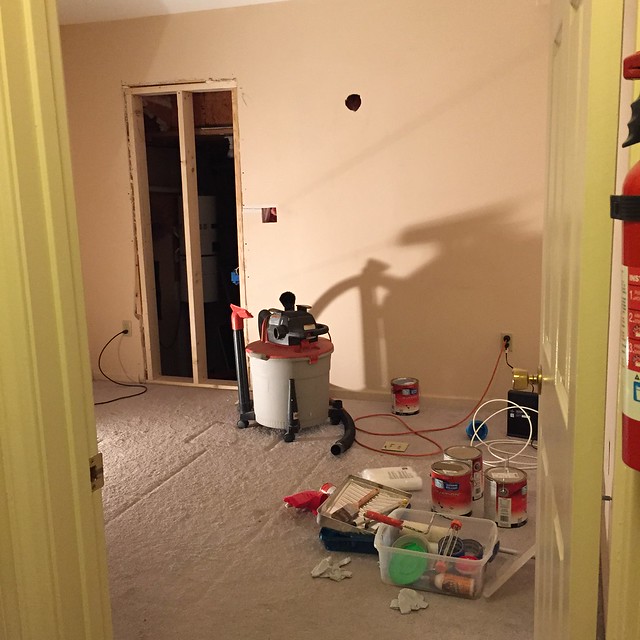 Grampy worked his carpentry magic and framed up the wall, then closed it up and had some help sanding it… 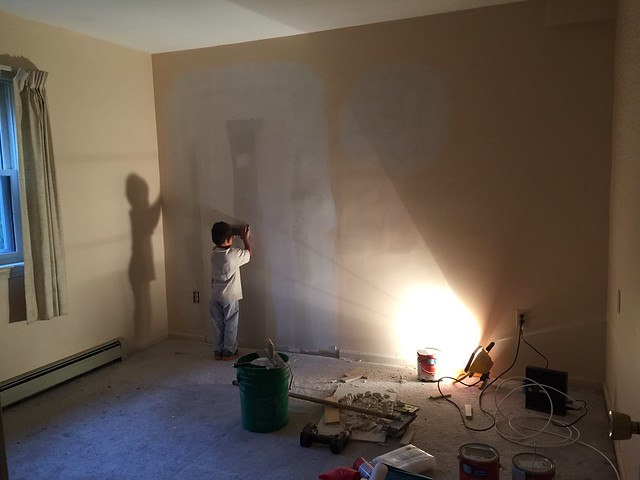 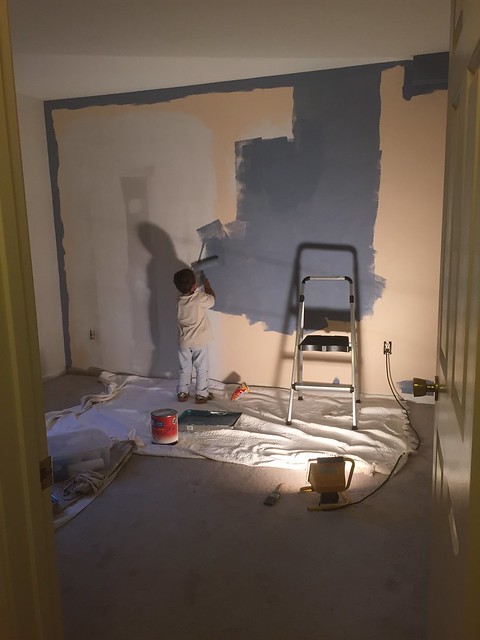 This is about the time Grampy teased Avery that he was going to make him a secret door into the garage that Avery could sneak out of, and Avery remembers everything, so when it was closed up, Avery kept asking where the secret door was.

October 26, 2015: We officially moved in and our ‘stuff’ was finding its way into each room in the new house.

Avery’s bunk bed came a little later because it needed a fresh coat of paint to match the new color theme.  When asked what color he wanted his room, Avery chose BLUE. His favorite.  I scored a FREE matching set of twin comforters from a friend (Thanks Victoria!) so, we chose a blue that would accent those well (What’s better than Free is a friend with great taste that gives away free goodies!).  The walls were given a fresh off-white and Avery got his big blue accent wall.

I didn’t buy any new furniture.  Avery’s closet is big enough for storage and hanging clothes.  He had a dresser, toy box, his activity table (which was originally a train table that the train set has outgrown and now its perfect for puzzles, legos, play-doh, etc.), and book/toy shelf.

Grampy installed the bunk-bed, Mimi supplied some awesome light blocking curtains (essential when your kiddo’s bedtime is before the sunset), I hung Avery’s artwork, and other little details.  Christmas came with the final touch for the room: picture frames of Dusty Crophopper.  Last summer Steve took me on a surprise date.  We setup by the lake on a picnic table with easels, dixie cups of wine, a giant box of crayons, and a coloring book from Planes (one of Avery’s favorite Disney movies).  It was his version of a ‘Paint and Sip’ night and said we could put the pictures up in Avery’s room when we bought the house.  So there they are.

Avery loves his room… not only because he can shut the door and Rosie can’t bother him, but because he has a place of his own.  Just yesterday he re-started his responsibility chart (a Melissa and Doug board that we LOVE) and said he was going to clean up his room.  Having a finished FOREVER room (well, until he’s in highschool and begs to move into the guest room in the basement, so Grampy predicts because that’s what I did!) for Avery makes me one super proud Momma – hard work really does pay off.

Onto the next room… I’ve been slowly working the past three months on little projects in the office and it’s almost ‘done’…. like a project is really ever DONE, ha!